Is losing weight and getting lean only a matter of eating less and work out more? While it could be hypothetically, there is a lot more to it than that when it comes to practice.

Today I want to highlight the importance of long-term perspective and patience when it comes to losing weight or transforming your body. Getting sustainable results takes time, and there are no shortcuts. Trust me, I have tried and failed.

A big part of the problem with quick fixes is that the initial enthusiasm will fade, along with all the will-power and positive energy. Which usually leads to slipping back into old habits again.

Perspective plays a paramount role in this. If you don't like the food you eat or continuously long for stuff you're supposed to stay away from, you will fight an uphill battle.

The same goes for excessive amounts of training. In May, with summer around the corner, it might feel natural to work out three hours a day, six days a week. But then comes fall, and all of a sudden, you're not that motivated anymore.

Let's take a look at a couple of examples.

This old picture of a transformation I made around 2010 is a good example. After indulging in lots of junk food, aprés ski beers, and more junk food, I had let myself become pretty fluffy and bloated.

Look at that accomplished-feeling, cocky dude to the right. Little did he know.

With summer approaching fast, I thought that extreme circumstances call for drastic measures. For six weeks, I followed this workout regimen:

On the nutrition side, I did my best to stay low-carb. But the cravings were terrible, and I compensated with snacking on peanuts. (Nuts are ok on keto, right?)

Six weeks later, I had rid myself of enough body fat to hit the beach confidently.

But it didn't last long. Summer meant late nights, indulging in more drinking and eating, and before I knew it, the fluff was back.

What went wrong? I just wanted the result, while the process was a necessary sacrifice I had to endure.

Fast forward to 2017. After a long, stable period of regular exercise and eating ketogenic, I fell off the wagon again. I had also hurt my shoulder and lower back, so the only training I could do was rehab. Combined with a new job and a lot of stress, it went south quickly.

In the picture to the left, there had been a few months of eating pasta, bread, and junk food; and I had replaced exercise with couch surfing. Something had to be done. 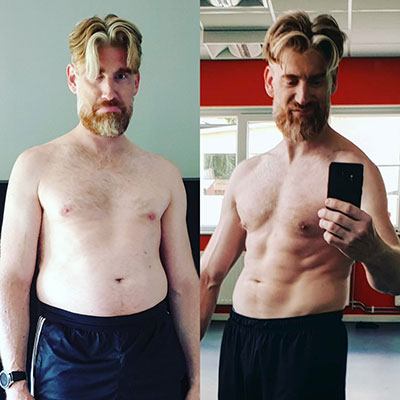 I was already back on keto when I could finally start lifting again, but this time I was not only bloated; I was also weak.

Still, this time was different. This time, I didn't just accept the process; I embraced it.

The food I put on my plate was there by my own choice, not because I had to eat it. The training volume was high enough to gain results, but not at the expense of the other aspects of life. I had made sleep a priority and kept my alcohol consumption to a minimum.

This time, it was a sustainable lifestyle change. One year later, in the picture to the right, I felt accomplished for sure, but it wasn't about crossing a finish line. It was just another day.

Of course, other factors played a role in these transformations as well. A single guy just starting to learn about LCHF has a different outset than a married man that has keto figured out.

It is also a tremendous psychological difference between striving for show-muscles vs. a performance goal like being able to do ten consecutive pull-ups.

In the former, you place the power to judge your progress in the opinions of others, while in the latter, you only judge yourself according to what you have achieved.

Always be honest with yourself and find out the real purpose behind why you want something.

Join my mailing list and get notified whenever a new post is out.
Topics range from personal development, to fitness and nutrition. In short – everything that makes up a sustainable healthy lifestyle.

I won't spam you, and you can unsubscribe at any time.

Thank you for joining!

A welcome email is on the way – please check your spam folder if it doesn't show up.

And to ensure that you don't miss anything in the future, add secondhalfcrusher@gmail.com to your trusted senders in your email program.